Pattern: How To Make A Crochet Butterfly 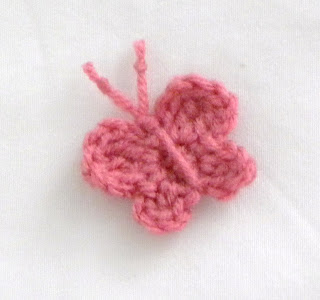 I've had butterflies on my mind lately so I made this little butterfly applique. Here is my pattern:


Using an E hook and worsted weight yarn (I used Red Heart Super Saver), make a magic ring (aka magic circle, disappearing circle, ajustable ring) and leave a 6" tail. All that is, is the circle you make when starting a slip knot but instead of tightening it like you would with a slip knot, you crochet into it. This way you don't have to make a circle out of chains and there's not a big hole left afterwards because when you're done you tighten it.

Once you have your circle ready, do the following:


Now for the best part! It's the best because instead of weaving the tails in (hate doing that part), we use them to make the body and the antenna. Tie off and cut leaving 6". Take your tail that you just tied off and bring it up the back and hold. Now take your tail from the beginning (the one that's in the middle of the back) and bring it down, under (between the two smaller wings) and up the front. Now tie the two tails together at the top of the butterfly (between the two bigger wings). Now take both strands of yarn and make a knot as if they were one strand right over the knot you just made when you tied them together. Now tie a knot in each strand where you want the antenna to end and snip just above the knot.

I hot glued it to a skinny nylon headband. 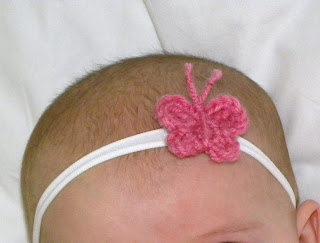 You could also glue it to a hairclip or attach it to a hat. Just use a bigger hook for a bigger butterfly. Enjoy! I'm happy to answer any questions or clear anything up that doesn't make sense.