Tutorial: How To Make A Vinyl Catch-All Bib

You know those frigging awesome catch all bibs from Walmart that cost $5 and are only "wipeable" on one side? Well they're my favorite except the fact that I have to replace them constantly since you can't wash them (only wipe) and the back gets gross so fast.

SOOOO I decided to make my own with both sides being wipeable and boy oh boy I love them so much!

I made my daughter's with that vinyl that has the fuzzy stuff on the back. $2/yard at Walmart: 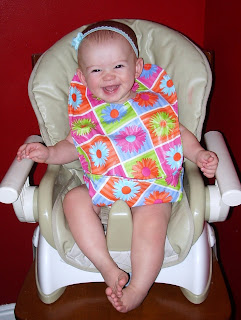 Then since they didn't have a cute boy patterned vinyl I just made my son's with the clear stuff and it's actually kind of cool how it's see through! And only $1 something per yard!!! This one is even easier since you don't have to sew at all... just cut and add snaps: 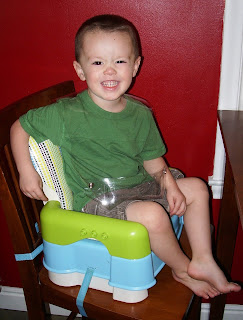 All I did was use my old bib as a pattern.

For my daughter's I had to cut 2 pieces (each a little bigger than the bib for seam allowance) and sew them right sides together leaving an opening at the bottom to turn then topstitch all the way around. If you want more details on sewing this see my other bib tutorial here, it's the same idea minus the batting.

For my son's I only had to trace and cut one piece.

Once the bib is made you add snaps (I like the hammer on kind) in the same place as the Walmart bib's snaps (except I excluded a couple that I felt were not necessary) and you're done.

They're so easy to clean and the only *true* catch-all bib, in my opinion, because the bottom actually sticks out instead of lying flat, because of the snap placement and shape of the bib.

I think I'll be adding these to my Etsy shop since I think everyone should have one!