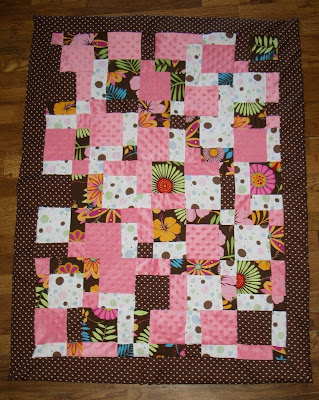 I love this quilt top pattern! It's called the "disappearing 9 patch" and the tutorial I used for it is found at Just Pure Lovely. I like it because it looks like it took a lot more work than it actually did! All you do is sew 9 squares of fabric together then cut that down the middle both ways so it makes 4 squares, mix them all up and sew them together! Okay maybe that sounds hard but if you just look at the pictures you'll get it. I only used 4 different fabrics instead of the recommended 9 because I was matching my crib sheet and dust ruffle and adding more patterns would have been too much.

As far as the binding, I refuse to do *real* binding because that much hand-sewing BITES. So instead I found Every Day Mom's great tutorial for self-binding. The only part I didn't do was to top-stitch at the end - instead I just hand-sewed the small opening shut. Oh and I also managed to get batting inside there by just squeezing the batting into the tiny opening at the end then tying it to keep it in place.
Let me know if you have questions and show me if you do one of your own!