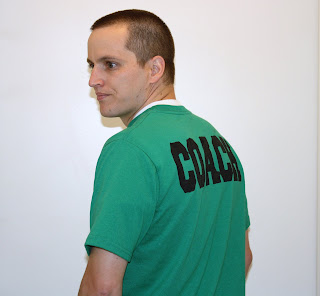 I don't know why but I've always been too chicken to do the freezer paper stencils... maybe because all the tutorials I found said you had to take an exacto knife to the image and that sounded like way too much work!

Well I went to a craft night with some friends and one of them was doing a shirt for her husband for Father's Day and she was using this tutorial from I Am Momma, Hear Me Roar. This girl was using the Cricut to cut out her image so I decided this was a way cooler idea than my original one (which was actually cool too - I was going to have my 3 year old son write "Dad" on a shirt and then use a bleach pen to trace over it). I found this website describing how to do this with your cricut.

This project was so fun for my son because after I applied the freezer paper to the shirts with the iron, he could paint on the stencil and essentially be the one to make Dad and Grandpa's shirts. My husband needed a green shirt anyway since he's going to be coaching my son's soccer team and their jerseys are green. I think I may do another one just like it but use heat transfer vinyl instead of fabric paint for a more professional look.

The "Grandpa" one was tricky to design because of the swoosh part... it took forever to design in my Make The Cut software. 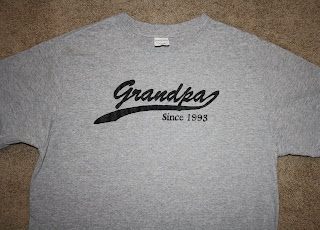